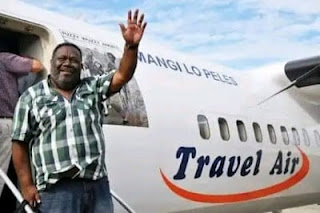 YOUR favourite airline Travel Air – known for its budget low cost airfares – is coming back.
Eremas Wartoto, the owner of Travel Air, announced this yesterday saying he is looking at resuming with 3 Boeing 737-300 series aircraft.
Famous for its ‘Mangi Lo Ples’ logo featuring the iconic fuzzy wuzzy angel Raphael Oimbari, Travel Air offered low budget airfares for ordinary Papua New Guineans a decade ago.
The return of Mangi Lo Ples will be good news for the travelling public, who have been staggered by rising airfares each year since 1975.
Mr Wartoto said there were ways to reduce the costs and one was by extending airport runways to accommodate bigger planes that can carry more passengers so that the costs can be shared.
“Mangi Lo Ples is coming back because I cannot stand the costly airfare rates which are killing our citizens. Domestic airfare cost must be reasonable to allow people to travel. We are being robbed,” Mr Wartoto said.
He said once all the aviation requirements are met, Mangi Lo Ples will resume services with Boeing 737-300 series which will service major ports in the country.
“We are looking at three Boeings 737 for the start, which would be brought in from Europe. It would accommodate up to 150 passengers and three tons of cargo.
Posted by Wewo Kotokay at 7:59 AM No comments: